Advice: GO SEE THE HUNGER GAMES!
Seriously, even if you haven’t read the book, I think it’s one of the most beautiful movies I have ever seen. 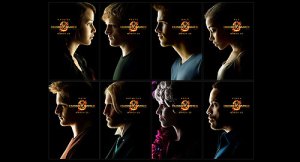 The characters of The Hunger Games

Seriously. The cinematography really conveyed the sense of seriousness the book put out. Watching that movie felt more real than almost any other movie I have seen. At times, the camera would be moving sort of like a home movie, but it was more elegant. And the fight scenes. These guys really had to be careful what they showed, as it had to be a PG 13 movie (for the fan base).

I didn’t realize until now how hard it is to talk about a movie without spoiling it. But I am trying mighty hard.

I think what impressed me most about the movie is that they got the personalities almost spot on, even if the characters didn’t “look right” (although whatever that means is under serious question, here). They act pretty much how they are described in the book, and that is an amazing feat.

Thinking back, I also remember how desolate everything seemed. The camera lens looked as though it had a screen of gray over everything, and that really helped make things feel desolate, almost hopeless.

ARGH! I have to stop talking about this before I go spoil it for you guys. GO WATCH THE HUNGER GAMES!

If my book ever becomes super popular, and if it gets turned into a movie, I want it to come off as well as Suzanne Collin’s did with her works.